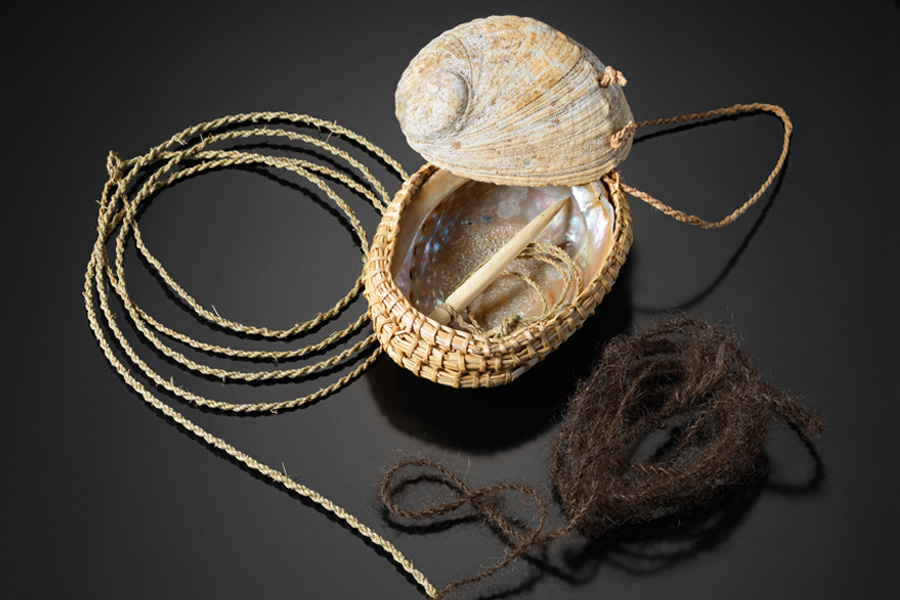 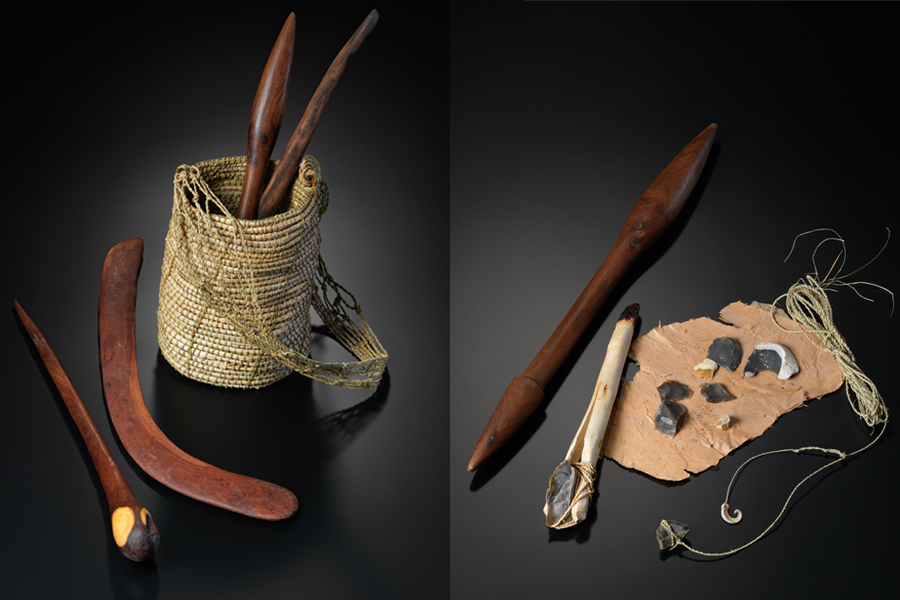 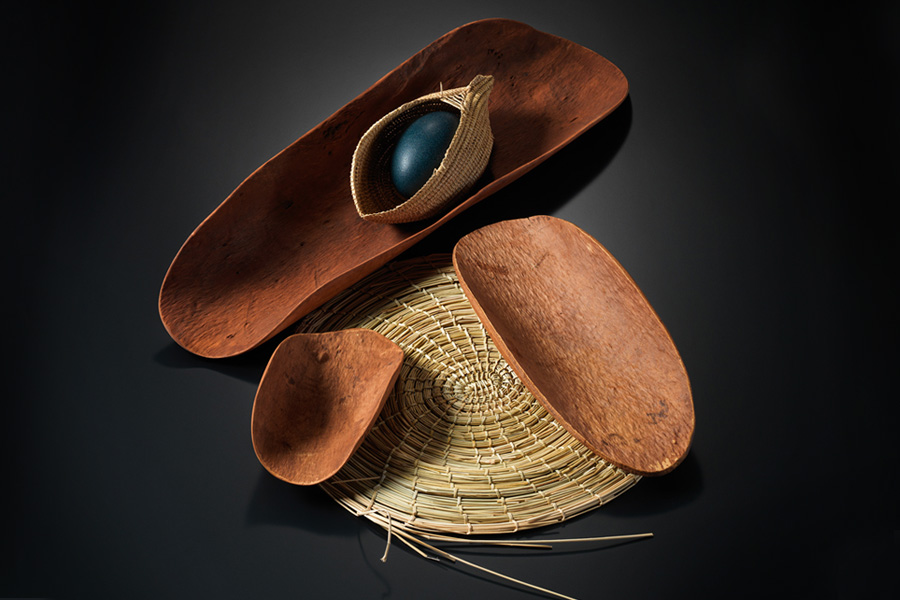 Artists Peter Turner and Clem Newchurch are recipients of The Guildhouse First Nations Collections Project with the South Australian Museum (SAM), a collaborative project providing artists with the opportunity to research the Museum’s extensive collection and develop a new body of work for exhibition. The exhibition at Gallery M has been supported by the City of Marion, to celebrate and showcase First Nations artists as part of Reconciliation Week.

The artists responded to the George French Angas collection of 1880’s illustrations of botanicals, First Nations people and the south-eastern coastal landscape of South Australia, with a particular focus on works depicting Kaurna/Rammindjeri people painted between Adelaide and Cape Jervis. Utilising their deep connection to the landscapes depicted in the illustrations and incorporating their own research into their Ancestor’s practices, Peter & Clem have recreated carvings, art and craft pieces similar to what their Ancestor’s made prior to European colonisation.

Peter Turner is a Narungga, Kokatha, Ngadjuri man who has lived in Wallaroo since his childhood in the early 1970’s. His Ancestral connections extend into surrounding South Australian Aboriginal nations such as Yankanyjatjara and Kaurna. He continues to live on Narungga land today, with his wife and younger children. Peter has had many forms of employment on Narungga land over many years. His earlier jobs included cleaning grain ships and fishing professionally from a young age. For many years Peter has been the only professional snake catcher on Yorke Peninsula.

Peter learnt from his Elders from a young age and was granted responsibility to be a custodian of Northern Narungga Country by his Aunties. He continues to research as much as he can about his culture. His cultural knowledge and the knowledge he holds in regards to Narungga lands has led him to work in various forms, over many years, protecting cultural heritage assets and the natural environment on Yorke Peninsula. Peter regularly undertakes work with the Department of the Premier and Cabinet’s Aboriginal Affairs and Reconciliation Division still to this day. Peter is a cultural leader within the Narungga community and regularly shares his knowledge with school children, through working with schools and the Science Curriculum Team within the Department for Education of South Australia.

Amongst many other things, Peter has also been an artist (painter) and maker of traditional Narungga tools, for many years. He comes from a family of many well-established artists. He uses his traditional knowledge of plants and other resources to revive ancient Narungga practices, such as string and net making.

Clem is a Kaurna Narungga Kokatha man who has resided in the southern Adelaide region for the majority of his life. He has extended Ancestral connections to surrounding South Australian Aboriginal Nations such as Yankanyjatjara and Ngarrindjeri.
Clem worked for many years in the Youth and Community Services industries, working in roles such as Aboriginal Community Education Officer roles within schools and as a Community Development Officer working in Local Government. More recently Clem has worked in Arts and Education settings, exhibiting works and sharing his cultural knowledge through various settings such as programs, workshops and events. He has also worked in Film and Multimedia settings including Writing and Directing two NITV ‘Our Stories’ Documentaries that have been broadcast on NITV since 2018.

Clem began weaving after learning the Ngarrindjeri weaving style from Ngarrindjeri Elders at Camp Coorong many years ago. He continued weaving at home on Kaurna Country, sourcing materials from his local area and in doing so, found the appropriate native plants used to make string. Clem has since been developing his cultural artistic practice, learning from Elders, other community members and other sources (such as the South Australian Museum), sharing his knowledge along the way and supporting the revival of Ancient Kaurna cultural practices, including net making and carving.
https://www.instagram.com/clemnewchurchart/

← Beauty is Everywhere Snapshots from Life →